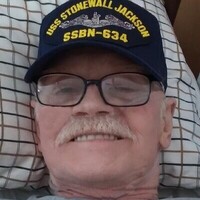 Stewart Moen, of Mayville, ND, died Friday, February 19, 2021 surrounded by the love of family and friends. A memorial gathering for Stewart will be held at a later date in May.

Stewart was born, son of Prentice and Esther Moen, on February 26, 1946, in Mayville, ND.  He graduated from Mayville High School where he participated in football, wrestling and FFA.

After high school, Stewart served our country in the Navy as an Electrical Technician on the nuclear submarine, The Stonewall Jackson.  It was an important time in his life for which he was proud.

After the service, Stewart spent most of his life in Mayville where he was self-employed doing concrete construction.  He was also willing to take on a variety of projects that challenged and expanded his skills, sometimes just to see if he could do it.  He always completed them.

Stewart was a gifted musician who played in the popular local band, Pure Country.  He enjoyed writing and singing his own songs, jamming with others, especially his brothers, his sister and very special longtime friend, Arlene Darvell,

Stewart was a craftsman who was always learning.  He enjoyed doing wood carving, woodworking projects of various kinds and most recently building electric guitars from the wood of an ash tree cut down in his yard.

Stewart will be missed by his family and friends and all who knew him.

To order memorial trees or send flowers to the family in memory of Stewart Allen Moen, please visit our flower store.