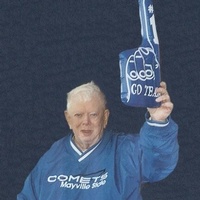 Stanley Leroy Dakken, 82, was born Aug. 6, 1936 in Mayville, ND, the son of Emil and Gunda (Langager) Dakken. He was the youngest of the eight Dakken siblings. He passed away Sunday, May 5, 2019 at the Luther Memorial Home, Mayville, ND, surrounded by people who loved him.

Stan was raised in Mayville. His formal schooling was short-lived, lacking the individual attention that he needed. So at about age 8, he graduated himself from first grade and moved up the street to go to college: Mayville State. There he learned numerous life lessons from his buddies—students, teachers, and Power House people alike, as well as from his friends downtown.

Mayville State became an inseparable part of his life. Except for moving to the Home in 2016, when he broke his leg, he never really left, though over the years he faithfully traveled to follow his beloved Comets and to visit family members.

Except for his part-time sweeping and snow-shoveling jobs around Mayville, Stan didn't have a career. (Riding shotgun with his trucker brother, Kenny, didn't count.) Although he did not earn wealth as the world knows it, he was rich in everything that matters. He was loved. Cared for. He had a moral compass. He knew that Jesus loved him. He didn't have to battle an ego or suffer occupational stresses. But his quiet influence was such that his nephew, Dave, said that Stan was “the Thumb that God has given us to find our page in the book of life.”

Stan's life was noticed—not just for his “Stan-isms” and illogical logic—but for what he represented. As a result, this diminutive fellow accrued more honors than most others who do live in the “real world”: a street named for him; an endowed scholarship at Mayville State named for him; honorary  membership in the Mayville State Athletic Hall of Fame; recipient of a key to the city; a key to Mayville State, in honor of (then) “nearly sixty years of college attendance”); first recipient of the honorary degree given at Mayville State (Bachelor of Humanity with a major in kindness and good works); honoree in a three-day celebration in May-Port for his 65th birthday; named an honorary fire chief in Mayville; a member of the Keystone Kops; and much more. He sometimes made us laugh, and always made us smile.

Stan leaves to mourn his sisters, Iva Hill, Roma Beck and Gwen Shaffer; sisters-in-law Emma (Kenneth) Dakken Thykeson and Phyllis (Orville) Dakken; numerous close nephews and nieces and their families; hosts of past MSU associates, students and athletes, including “his boys” on the MSU basketball teams; hundreds of friends from his life in May-Port, and Dave's dog, Sloop.

He was preceded in death by his parents; brothers, Kenneth, Emil, Jr., Orville, Johnny, and his sister-in-law, Ella; brothers-in-law Joe Beck, Pete Hill, and Owen Shaffer; and nephews, Ronnie Dakken and Danny Hill.

Stan will “come home” to campus for a celebration of life at 1 p.m., Monday, May 13, 2019 at the Lewy Lee Fieldhouse on Stan Dakken Drive in Mayville. Visitation will be one hour prior to his celebration at the fieldhouse. After riding in his last “parade,” he will be buried in the Mayville Cemetery.

Memorials can be given to the charity of the donor's choice. Condolences and memories can be shared at www.bakerfuneral.com.

To order memorial trees or send flowers to the family in memory of Stanley "The Man" Dakken, please visit our flower store.