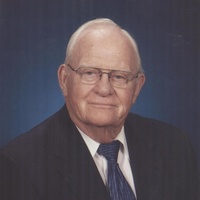 Peter was born on August 16th, 1931, in Hatton, ND to Peder and Agnes (Borgen) Boe.   Peter attended Hatton High School and was a letter winner in basketball, football and baseball.    He received his teaching degree from Mayville State College and went on to earn his Masters degree from NDSU.  On December 27th, 1957, he married Ruth Offerdahl at Washington Prairie Church in rural Hatton.  Peter and Ruth moved to Portland ND in 1960, when he began his 33 years career with the school district.  Peter, or “Mr. Boe” to all his beloved students and faculty members, wore many hats during his tenure at the school.  From teacher, coach, principal, referee, chaperone, to bus driver, he did it all.  He loved his job and was surrounded by many talented teachers, administrators, support staff and students whom he considered to be extended family.  He was deeply humbled to have his years of service recognized when the school district chose to rename the elementary school in his honor.  Peter and Ruth were both active members at Bruflat Church and Peter was a member of various civic organizations such as the fire department and commercial club.   In 2002 Peter moved to his cabin on Golden Lake and enjoyed several years living on the lake prior to his move to assisted living.

Peter loved to hunt, fish and play golf and shared his love of the outdoors with his children and grandchildren, who are forever grateful for those memories.  Peter put thousands of miles on his pick-up truck attending his grandchildren’s school and church programs, sporting events, dance recitals, etc.  Peter was a man of great integrity.   If he said he would be there he was.  His word was golden.   He is remembered by his children and grandchildren as someone they could always count on to help out when needed, to cheer them on from the stands, offer words of encouragement, or simply give one of his special winks.

Peter will be greatly missed by his sons Ron (Connie) Boe, Steve (Julie) Boe, his daughter Julie (Mark) Paulson, his 11 grandchildren and 7 great-grandchildren.   He was preceded in death by his parents, his wife Ruth, sister Corrine (Doug) Ludwig and brothers Paul (Gladsey) and Arley (Gloria) Boe.

Peter’s family would like to express their deepest appreciation for the wonderful care he received at Lilac Homes Memory Care.

To order memorial trees or send flowers to the family in memory of PETER BOE JR., please visit our flower store.