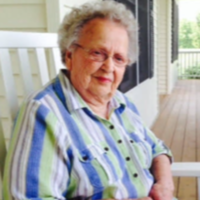 She was born August 4, 1922 to Otto and Karen (Cora) Gensrich on her family’s farm in rural Northwood, North Dakota.  In grade school her family moved to Sunbeam Hill Farm in rural Hatton, where she grew up.  She attended Union 54 elementary school and graduated from Hatton High School in 1940.  After graduation she worked at Yellowstone National Park with her sisters Phebe and Cecile.

On June 21, 1943 she was united in marriage to Millard Monson (‘the boy next door’) in Inglewood, California where Millard was stationed during WWII.  When Millard was transferred to Arizona, Lucienne returned to Hatton where Millard joined her after the war.  Together they raised their family and farmed the Monson family homestead until their retirement, after which they spent many winters in Mesa, Arizona.

Like her sisters, Lucienne was a talented artist.  The homes of her children and grandchildren each include a special piece created just for them.  In addition to her art, Lucienne enjoyed listening to her books, playing cards, gardening, and baking, especially when it included the company of her family, and she never missed a Minnesota Twins game.  Each of Lucienne’s grandchildren can describe unique memories of time with Grandma – making mud pies, digging potatoes, baking buns and flatbread, creating ‘parks’ in the woods, and riding with her in a grain truck, chasing Grandpa around the field.  They will especially never forget Grandma sitting all of them down together and handing them each a box with childhood drawings, letters, and school projects she had saved for decades.  She will be dearly missed, but their memories with her will be cherished forever.

Welcoming Lucienne to heaven are her beloved Millard and son Terry, as well as her parents and sisters: Cecile, Frances and Phebe; brother: Bud and many lifelong friends.

Services will be held at a later date.

To order memorial trees or send flowers to the family in memory of Lucienne H. Monson, please visit our flower store.