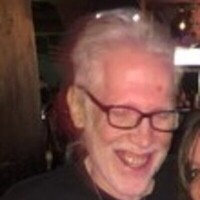 Kim Paul Walker, 63 died on November 7, 2019, in his home.  He suffered a head wound as he assisted co-workers in escorting unruly patrons from the Upside Down Plaza in Birmingham, AL

Kim was born on August 4, 1956 to parents Daniel G. and Marguerite Walker in Mayville, ND where he grew up, graduating from Mayville-Portland High School. He went to Mayville State College for a year, when he was called to sing in a rock and roll band in Grand Forks. He also started his career as a bartender at that time. He had a bout with cancer and survived.

He remembered his family with a phone call usually after the bar closed and often ended his conversations with an Alabama salutation of “ROLL TIDE” in his acquired southern accent.  He never forgot his home state as he had a UND Sioux hockey jersey and a NDSU Bison football jersey in his closet. He was most proud of his daughter Neily and his son William and always wished the best for them.

Kim considered himself “The Famous Bartender”, “World’s Best Bartender” and “World’s Greatest Bartender”. Kim spent many years honing his craft as a bartender in various places across this nation including his start in Grand Forks, ND, a time in New Orleans, LA and finally in Birmingham, AL, walking, riding bus and hitch hiking from one location to the next.

Kim had a love for music and never missed an opportunity to sing at a wedding dance, karaoke machine or just jump up on the bar and break into song.  Kim could do a great rendition of Kansas City by Muddy Waters, Paperback Writer by the Beatles or rendition of his mother’s version of an Irishman’s Shanty.  Kim had theatre skills and was the only member in his family to attend drama camp at the International Peace Gardens.

Kim’s sister Cheryl Franch(Rob) and brothers Don Walker(Anne), Dwight Walker(Dana), Mark Walker(Mary), Scott Walker, Patrick Walker(Debra) and Fred Walker(Michelle) will be laying Kim’s ashes  alongside his parents graves on September 25, 2021 at 10:30 am at the Mayville Cemetery with small get together afterwards at the Mayville Golf Club to tell Kim stories and there are many.  Memorials will be used for Kim’s funeral expenses with any extra donations going to the Great Plains Food Bank.

To order memorial trees or send flowers to the family in memory of Kim Paul Walker, please visit our flower store.