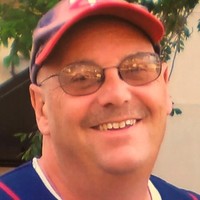 Kelly John Lipsiea was born March 22nd, 1960 to Earl and Paula (Schable) Lipsiea in Mayville, ND as the sixth of seven children. Raised in Mayille, Kelly spent much of his childhood exploring and enjoying the outdoors with neighborhood friends and siblings, and graduated from Mayville-Portland High School in 1978.

While attending Mayville State University, he became pals with the wild and crazy Rick Rivard who introduced him to his sister and love of Kelly’s life, Julie. They said their “I dos” on Aug. 29, 1980 at Our Lady of Peace in Mayville.

Kelly and Julie had three children that he loved dearly. Julie, Jessica, Patrick and Harry were the center of his life. The family’s love carried them through three different states as they lived in Stevens Point, Wisconsin, Grenora, North Dakota, Mankato and Albert Lea, Minnesota before coming home to Mayville in the summer of 1994.

Then Kelly teamed up with his youngest brother, David, to own and operate what was first their mother’s restaurant, Paula’s Cafe, in Mayville for 14 years. Like their mother before them, the Lipsiea brothers put smiles on the faces of many with home-cooked meals. As a boss, Kelly was a trusted mentor to many due to his patient and caring ways.

In 2007, they sold the business. For the better part of the next 12 years, Kelly continued to make people smile with his wry humor through his daily deliveries to businesses throughout the May-Port Community as a wholesale Dairy Distributor with Three-Star Dairy.

Along with his wisecracking, Kelly was known by all for his kind and gentle demeanor. To go along with his quiet nature, he found tranquility in the outdoors. Whether he was going for a drive in the country, a walk in the woods, or gazing at the sky with a cup of coffee on his deck, Kel was at home outside. An avid lifelong sports fan, Kelly always had a game on the television or radio no matter what he was doing. His natural inclination to root for the underdog paired well with his lifelong love of Minnesota sports teams. Games were always that much better alongside his number one cheerleader Julie as was everything, including travel. The two went on many adventures together.

Visitation:  Will be 5–7 PM with a 7 PM Public Prayer Service on Wednesday, November 13, 2019 at the Baker Funeral Home Chapel in Mayville, ND and will resume one hour prior to the service at the church.

To order memorial trees or send flowers to the family in memory of Kelly J. Lipsiea, please visit our flower store.