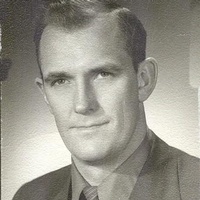 John Merle Knudsvig 82, Clifford ND passed away May 27 at Sheyenne Crossings, West Fargo ND peacefully with family at his side.

John was born July 15, 1936 rural Buxton to Gerhard & Jeannette Knudsvig. At the age of four, his parents bought a farm near Clifford where he grew up. He attended Blanchard Country School, graduated from Clifford High School in 1954, Mayville State College in 1958, and attained his Masters Degree in Education from NDSU in 1964. His thesis was written on Keeping Rural Schools Alive. John served in the Army National Guard from 1955 to 1963.

John met Helen Evans attending Mayville State College and they were married on June 20, 1959, Mayville Lutheran Church. They made their homes in Ayr, Argusville and Hillsboro where he taught school, was Superintendent, Principal, and coach. In 1973 they bought the Burt Burkholder farm near Clifford where they continued to raise their four children. John farmed with his brother Perry for ten years and then with his sons until his retirement.

John was a Traill County Commissioner for 12 years, active in baseball, softball, American Legion, Clifford Elevator Board, Clifford Community Development, Norman Lutheran Church council, Sunday School teacher and exercised with friends at Move for Life. He enjoyed card games (especially Pinochle), attending his families activities and was an avid fan of the Minnesota Vikings and Twins.

John was preceded in death by his parents, his parents-in-law Carl and Luella Evans, and sister-in-law and brother-in-law Lorrayne and Arne Bohm.

Visitation:  Will be 5–7 PM Friday, May 31, 2019 with a 7 PM Public Prayer Service at the Baker Funeral Home Chapel in Mayville, ND and will resume one hour prior to the service at the church.

To order memorial trees or send flowers to the family in memory of John M. Knudsvig, please visit our flower store.