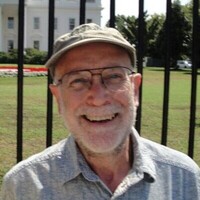 He was born in Lawrenceville, Illinois, to John and Patricia Cunningham. His life’s journey began when his father took the family north through the west central plains as he worked for an oil drilling company. Mike lived in his family’s mobile home in many little oil towns in Oklahoma, Wyoming, Montana, and North Dakota. After a time in Williston, the family left drilling and bought a business in Grand Forks, where Mike attended junior high and high schools.

Mike met Lora Satrom, Galesburg, at the University of North Dakota. They shared a love for theatre arts, and participated in many productions. They married, studied, and Mike delivered pizzas and grinders as they finished their degrees. The University of California Riverside brought Mike his first opportunity in his field, working for the UCR Theatre Facility Unit.  In time, they moved north to Humboldt County, where he earned his Master of Fine Arts and they found a love for the cool but temperate coastal climate. Arcata, CA was their home for 31 years. Their daughter grew up in Arcata, and the family hosted many exchange students in their Arcata home. Mike happily kept those connections. Mike was involved in a variety of jobs besides theatre.  He worked in construction, bottled beer, and enjoyed his time as a late night disc jockey.

Retirement brought them back to North Dakota for the past 6 years. Mike enjoyed woodworking, music, and online shopping.  He was a record collector his entire life.

Mike is survived by his wife of 46 years, Lora, daughter Sonja, Las Vegas, NV, and his sister Sue Krahn of Milbank, SD, as well as many nieces, nephews, and cousins.  He joked that the first Satrom reunion he attended overwhelmed him and he gave up trying to remember names.

He was preceded in death by his parents, brother-in-law Don Krahn, and he especially mourned his friends and colleagues who also died of complications of alcohol.

In the interest of keeping fragile family members healthy, face masks will be required for attending this service.

Funeral Service: Will be held at 10:30 AM Saturday, October 23, 2021 at the Mayville Congregational UCC Church in Mayville, ND.

Burial: Will be in the Elm River Cemetery in Galesburg, ND.

To order memorial trees or send flowers to the family in memory of John "Mike" Cunningham, please visit our flower store.