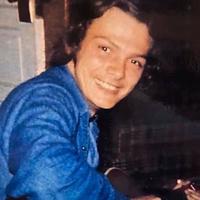 James Dale Wright, 61, passed away February 18, 2020 at home with the care of Hospice of the Red River Valley.

He was born May 6, 1958 in Spirit Lake Iowa, the son of James Earl and Helen Louise (McCann) Wright. He grew up, most of his young life, in Illinois where he attended Watseka Community High School.

James married Penny Mastin on Dec 1, 1979. He has two children: Justin Wright and Miranda Spencer. Jim and Penny later divorced. Jim had lived several years in Virginia and then moved to Tennessee where he lived for about 20 years before moving to North Dakota for the past year. He was employed as a butcher most of those years.

Jim enjoyed collecting and reselling knives and coins. He loved fishing with friends and family.

He is proceeded in death by his grandparents; mother: Helen Louise Wright and brother: Steven Wright.

Visitation will be held at the Knapp Funeral Home in Milford Illinois On March 28, 2020 time 10-11 AM

To order memorial trees or send flowers to the family in memory of James Dale Wright, please visit our flower store.