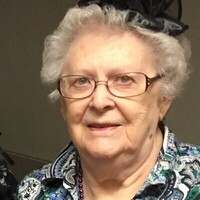 Irene was born June 26, 1930 to parents Carl Higdem and Lisa (Hagen) Higdem.  She grew up and attended school in Portland ND, graduating in 1948.

Irene is survived by her brother, Richard Aamold and sister, Judy (Richard) Beck, both of Portland; step-son, Andrew (Linda) Lidstrom of Mandan ND and Robert Lidstrom of Cheyenne WY; two step-granddaughters and three great-grandchildren and several nieces and nephews.

Graveside services will be held on June 26, 2022 at 2 PM in the Aurdal Cemetery in Portland, ND.

To order memorial trees or send flowers to the family in memory of Irene Joyce Lidstrom, please visit our flower store.