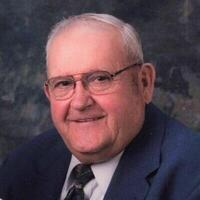 Howard J. Skrivseth, 87, of West Fargo passed away at Sheyenne Crossings, West Fargo on Sunday, January 2, 2022. He had been a patient there for about a month. He had been assisted by Hospice in his illness since he moved there.

Howard was born February 12, 1934, at Buxton, ND in Traill County, North Dakota. Because of bad winter weather he was born at the home of his uncle and aunt, Ted and Minnie Berkness in Buxton.

He attended Wold School #1 through Eighth Grade, then he became a farmer at a young age. He cultivated corn when he was seven years old. His dad told him to watch the horses when Alfred went to the house to start the Maytag Washing Machine for Grandma Julia. The horses started going and he made a round on the corn. His Dad said he did so well he could keep going which led to many future years of cultivating.

During his farming years he loved to go to auction sales. This led him to an interest in buying and selling horses, machinery and vehicles.

He married Bernice Domier at the Norman Lutheran Church at Clifford, Nd on July 16, 1955. She was the daughter of Joseph and Doris Domier who also were farmers. Howard and Bernice lived on the same farm with Alfred and Julia for many years. They usually had a big garden. In August 1974 a big hailstorm left them with 100% crop loss with drifts of hailstones around the farm. We planted 1,100 onion plants that year and they were completely shredded by the force of the wind driven hail. The yard reeked of onions for a long time after the storm.

In 1983 we remodeled the farmhouse and lived there the next 14 years. Howard retired from farming in 1996. We sold the farmstead in 1997 and had an auction sale, then moved to Hillsboro where we lived for 10 years, later to West Fargo.

Howard is survived by his wife Bernice, (66 Years). His daughter, Julie Paintner, and his Son-in-Law Zachary Paintner. Julie and Zach have 4 children; Madison, Twin Boys: Christopher and Noah and the youngest child, Jacob.

He is preceded in death by his parents: Alfred and Julia (Knudsvig) Skrivseth; a baby sister: Deloris and sister: June Jore (Ole); brother-in-law:  Jerome Domier and Joseph ( Doris) Domier.

Visitation:  Will be 1 hour prior to the service at the Baker Funeral Home Chapel in Mayville, ND.

Funeral Service: Will be held at 1:00 PM Thursday, January 6, 2022 at the Baker Funeral Home Chapel in Mayville, ND.

Burial: Will be in the Immanuel North Cemetery in Buxton, ND.

To order memorial trees or send flowers to the family in memory of Howard J. Skrivseth, please visit our flower store.