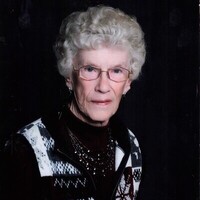 Hilma married Alton Hovde on July 6, 1947, and they made their life together on a farm near Portland, ND. Alton and Hilma had five children. Their first three children each passed away before reaching a year of age. They were then blessed with two healthy children, Marlene and Curtiss.

Hilma received her master’s degree in education and taught school for thirty years before retiring. Hilma also helped Alton run the family farm, taught piano, was an avid seamstress, would garden and mow lawn at full throttle, baked many wedding cakes and goodies, and made several hundred rounds of lefse.

Hilma loved her family, spending time baking and sharing meals with them. She began each day with devotions, prayer, and loved and served her Lord faithfully all her life. Hilma also loved music. She could play the accordion, autoharp, guitar, piano and organ. For many years, she played piano for church and family.

After Alton’s death, Hilma remained on the farm until moving into Mayville in 2015. She lived first in Sun Center and later became a resident of the Luther Memorial Home.

Funeral Service: Will be held at 2:00 PM Tuesday, March 8, 2022 at the Bruflat Lutheran Church in Portland, ND.

Burial: Will be in the Aurdal Cemetery in Portland, ND.

To order memorial trees or send flowers to the family in memory of Hilma Hovde, please visit our flower store.