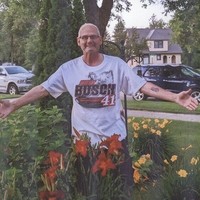 Harvey was born March 8, 1958 in Grand Forks, ND to Harvey Sr. and Yvonne (Gregoire) Helle. He attended elementary school in Grand Forks but graduated from East Grand Forks, MN in 1976. Harvey started working at Warehouse Foods in EGF where he met his lifelong friend Bob Murray. He then went to work for Coca-Cola where he retired in 2018 after 39 years.

On January 18, 2008 he was united in marriage to Lori (Yard).  He enjoyed doing things in the house and around the yard and loved to show his basement to everyone who stopped by. He loved spending time at home with Lori and bowling. He bowled on many leagues for many years. Harvey will be most known for his happy go lucky outlook on life and his work ethic.

He is survived by his wife: Lori; daughters: Alicia Helle of Sioux City, IA, Tiffany Helle of Ames, IA, Nicole Alexander (Cullen) of Anchorage, AK and Jay Hughey also of Anchorage. He was also blessed with 6 grandchildren. He is also survived by his mother: Yvonne; uncles: Dan Helle and Gerald Helle of Thief River Falls, MN and his aunt: Alice Thune also of Thief River Falls, MN; and many cousins.

He is preceded in death by his dad: Harvey Sr.; uncles: Lester and Norman Helle and his aunt: Laura Cariveau; and grandparents.

The family would also like to thank the Hospice team that helped Harvey in his transition and the support and care that they gave Lori also!

Private services are being held on Thursday with burial at the Carl Ben Eielson Cemetery in Hatton, ND.

To protect the health and safety of all, services are currently being limited as required by state and local authorities and the CDC.

To order memorial trees or send flowers to the family in memory of Harvey Helle, Jr., please visit our flower store.