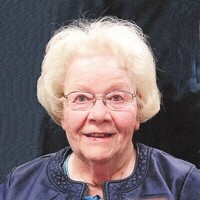 There were eight children in the family. Five brothers preceded Gwen in death, Kenneth, John, Orville, Emil Jr. and Stanley. She is survived by two sisters, Iva Hill, 97 years of age living in Sequim, Washington and Roma Beck, 94 of Mayville, N. D.

Gwen entered grade school and graduated from high school in Mayville and eventually was employed by Pacific Northwest Bell where her career lasted 33 years until she retired in 1983. While living in Denver, Colorado she met Owen G. Shaffer. They were married on July 17, 1957. Owen was lifetime military, so the couple lived near military installations. They were living in Tacoma, Washington near Ft. Lewis where Sgt. Shaffer was stationed when he retired after 20 Years in the Army.

While living in Tacoma, Gwen’s brother Stan came from North Dakota to live with them. Owen and Gwen were married 44 years when Owen died in 2001. It left Gwen feeling alone in a changing neighborhood. The following year Gwen decided she and Stan would move back to their hometown of Mayville, N. D.

She still had plenty of relatives around. Other people were also familiar to her and they re-connected, but the transition for Gwen was difficult at times. However, without a doubt, Stan was no passing stranger. In his life he remembered more people than seemed possible. In turn the town easily, quickly remembered him; back in Mayville he picked up where he had left off.

Consequently, it was Stan who opened other doors for Gwen. She couldn’t have had a better mentor. One of those doors opened into the world of Mayville State University, particularly, as it turned out, Comet basketball. Gwen was not an interested basketball fan previously. At the start of her relationship with Comet basketball, she didn’t know a full-court press from a charging foul, and players didn’t have names, just numbers. Yet, she became a student of the game ... more so than a fan she became a friend, ally and companion of the players of the game. The relationships she nourished over the years with the student athletes, men and women, extended and expanded far beyond the floor the ball bounced on.

Those students will readily and proudly tell you how special Gwen was to them. For Gwen, who had no children of her own, the happiness and emotional fulfilment brought by those relationships, spanning many years, became her comfort zone and sustained her, especially after Stan passed way. Of her 90 years, her time back in Mayville may have been the best. She was very grateful for the love and support she received and shared.

Gwen became ill from “old age” late this fall, but fortunately she was able to enjoy Thanksgiving and Christmas with family, and she was even able to make it to a men and women’s basketball game. As we know there is an end to every game. So along with the excitement, noise, tension and pure fun of Comet basketball, Gwen knew she wasn’t going to rebound in the fourth quarter, and she wanted her final win to come at home. There on January 28, 2021 she called time out, leaving the huddle comfortably, quietly, and peacefully.

Our family wants to give a special thank you to Gwen’s caregivers while she was at home. Without them she might not have been able to stay there. Thanks to the entire team at Hospice of the Red River Valley, especially to Andrea Brend, who cared for Gwen almost daily and Judy Rekken, her weekly nurse. Also thank you to Courtney Archambeau, Kim Cantore, Dallas Joregenson, Kristi Parrish and Janell Hanson for providing quality care. Gwen’s nieces Cheryl (Dakken) Conway, Penny (Dakken) Leland, and Diane (Dakken) Schnebli spent hours with Gwen as well. And, Rachel (Dakken) Balstad, another niece, was the architect, daily planner and person most responsible for Gwen’s the entire care plan. She did a wonderful, loving job in a very professional manner!

This spring Gwen’s urn will be placed next to Owen’s at the Tahoma National Cemetery in Kent, Washington. Thank you everyone for being Gwen’s friend and for keeping her in your memories.

To order memorial trees or send flowers to the family in memory of Gwen Y. Shaffer, please visit our flower store.