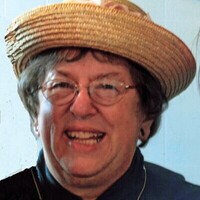 Geraldine “Geri” Voltz, 67, of Galesburg, ND, passed on to her new life, with family by her side, Thursday, February 25, 2021 at Sanford Hospice House in Fargo, ND.

Geri was born January 24, 1954in Union Hospital, Mayville, ND to Gerald and Marion (Reinhart) Kyllo. She grew up in Greenfield Township, Traill County, on the family farm. Geri attended the Clifford-Galesburg High School, graduating in 1972. She was baptized, confirmed, married and was a lifelong member of the Stordahl Lutheran Church, rural Galesburg, ND.

After a few years working in Fargo at a nursing home, Geri returned to Galesburg and married Jeffery Voltz and they resided in Galesburg for the remainder of her life. She did a lot of babysitting and began a career working at the Luther Memorial Home in Mayville, until retiring after 36 years.

Geri loved people, especially if she could joke back and forth. Not having children of her own, she became attached and related to those she came in contact with. This extended to anyone, including the elderly.

Geri was preceded in death by her grandparents; parents and a sister: Evelyn Bertzyk.

Memorial may be made to Luther Memorial Home or Sanford Hospice House.

A Celebration of Life Service will be held at 5 PM on Thursday, July 15, 2021 at the Stordahl Lutheran Church in rural Galesburg, ND.

Burial: Will be at a later date in the Stordahl Cemetery in Galesburg, ND.

To order memorial trees or send flowers to the family in memory of Geraldine "Geri" Voltz, please visit our flower store.