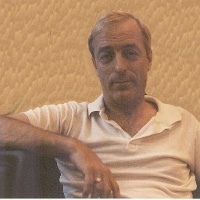 I was born on November 6, 1937 in Finley, ND the son of Hartwick and Irene Brainerd. My parents and us brothers (Gene, Joel, and I) lived in Golden Lake Township, eleven miles east of Finley. In 1941, we moved to Spokane, WA, where I attended one-half year of first grade. In 1943, we left Spokane and returned to North Dakota.

I continued my seven-and-one-half years of grade school at Golden Lake Center, which was one mile east of our farm. We then moved to Mayville, where I attended high school. I graduated from high school in May of 1955. I attended one-third year of college at the North Dakota Agriculture of Applied Arts and Science in Fargo.

I enlisted in the United States Air Force when I was 18 years old. My basic training started at Parks Air Force Base near Oakland, CA. Later, I was transferred to Biloxi, MS, where I continued to train for four and on-half months as an Air Traffic Control (ATC) specialist. In 1957, I was transferred

I first met Ellen Grant at the roller skating rink in Rapid City. We became dance skating partners and boyfriend/girlfriend with one-another. These are my favorite memories.

After returning to North Dakota, I moved to Minneapolis, MN. Afterwards, I moved to Aurora, IL, near Chicago, where I was employed by the Federal Aviation Administration as an ATC specialist, (General schedule, GS-6/8). Later, I moved to Marquette, MI, as a Flight Service Station specialist (GS-8/9). Afterwards, I moved to and worked at the Tri-City Tower airport (GS-11) near Saginaw. This is where I received my private pilot license. I then returned to the Chicago area, where I worked at the St. Charles, IL airport (GS-11). This is where I received my commercial pilot license.

I moved to Hudson, WI, for six months and later to Mendota Heights, MN, (near Minneapolis, MN) for two years. I again moved to Mayville for six months, but returned to Des Plaines in the Chicago area.

Since then, I have been living in Fargo, ND for more than two years, where I currently reside.

Gerald Brainerd entered the Luther Memorial Home in Mayville late in 2016 and has resided there since.

To order memorial trees or send flowers to the family in memory of Gerald A. Brainerd, please visit our flower store.