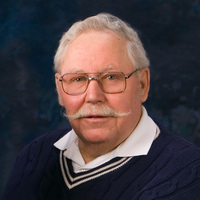 Gene Myron Gehrke, 86 of Aneta, ND passed away on Sunday, September 29, 2019 at Luther Memorial Home in Mayville, ND. Gene was born on March 22, 1933 in Aneta, ND to Julius and Sofie (Hillesland) Gehrke. He was baptized and confirmed into the Christian faith. He graduated from Aneta High School in 1951. On March 22, 1957 he married Bonnita Bajula from Walker, MN.

He was a very hard working farmer and loving husband and father. Teaching his children to lead a Christian Life.

Gene farmed and ranched all of his life with his brother Charles. After he and Bonnie’s first two children were born on Christmas Day, a year apart, he went from being known as Curly to Santa Claus for the next 40 years. His third child was born on Flag day which could have sparked his interest in politics. He also raised 100 head of cattle and later worked the farm with his son Noel. He enjoyed sharing his farming knowledge with his children and grandchildren.

He had a heart of gold, and was very active in the community. Time to volunteer as Santa, Gene enjoyed visiting shut ins and children. He also served on several boards, for many years; such as the Aneta school, Sundahl Church, Good Samaritan Center, Aneta Booster Club/turkey bbq, Nelson County Water Resource and President of ND state township officers, where all the ND state officers went to Washington, DC as it was there turn to lead the national convention.

In 1980 Governor Art Link presented him with an “Outstanding Community Leadership Award”. He supported the Republican Party of ND and ran for office in 1984. Resulting in lobbying in Bismarck, ND for the state water districts.

Gene loved to MC at the accordion contests in the area. He had a great sense of humor and loved telling jokes. After retiring from farming he enjoyed volunteering and supporting the Pioneer Village at Stump Lake.

In October 2018, due to health reasons, Gene and Bonnie moved to Luther Memorial Home in Mayville, ND. Gene loved to see his great grandchildren visit. They brought a smile to his face.

He was preceded in death by his parents: Julius and Sofie Gehrke, his brother: Earl Gehrke and brother-in-law: Norman Aslakson.

We were all very blessed to have him in our lives!

Visitation:  Will be 5–7 PM on Thursday, October 3, 2019 with a 7 PM Public Prayer Service at the Sundahl Lutheran Church in Aneta and will resume one hour prior to the service.

Burial: Will be in the Silent Hill Cemetery in Aneta, ND.

To order memorial trees or send flowers to the family in memory of Gene M. Gehrke, please visit our flower store.