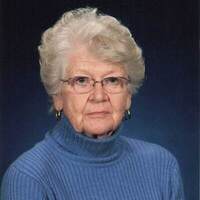 Fern Judith Studlien Fugleberg Rotto, 88, of Portland, ND passed away on July 25, 2020 at Luther Memorial Home in Mayville, ND where she had been a resident for a number of years.

She was born to Nels and Judith (Sandvik) Studlien on December 17, 1931 in Portland, North Dakota. Her parents were second generation from Norway. Fern had a great love for learning and valued education. As the eldest daughter, she managed to complete her high school education while helping to care for her 8 siblings.

Fern graduated from Portland High School in 1949 and started teaching in one-room schoolhouses in rural Traill and Steele Counties, ND. She earned her Bachelor’s Degree in Education with a minor in Library Science from Mayville State in 1966.

On August 16, 1953 Fern married Kenneth Orien Fugleberg at Aurdal Lutheran Church in Portland ND. Their son Stephan was born in Mayville, ND in 1954.

In 1957, the young family moved to White Mountain in the Alaska Territory, where they taught Iñupiat children in a two-teacher school. Fern and Ken danced in the streets in Anchorage when Alaska became a state in 1959. Their son David was born that same year in Nome, AK. Later that year they returned to North Dakota briefly. They returned to Alaska in 1960 to teach in Kiana, a village located North of the Arctic Circle. In 1962 they moved to Klagetoh, AZ, where they taught Navajo children. Their son Jonathan was born in Ganado, AZ that same year.

After retirement from the Panama Canal Company, they moved to Merritt Island FL, where Ken started a second career with Computer Sciences Corporation at the Kennedy Space Center. While with CSC they also lived in St. Petersburg, FL, and Belleville, IL.

In 1997, after Ken’s second retirement, they returned to Portland, ND. They moved the Enger #3 schoolhouse, where Ken had taught, to Portland and refurbished it for their retirement home. Both Fern and Ken became very active in the communities of Portland and Mayville, including: Portland Golden Age Club, Sons of Norway, Bang Lutheran Church, “Meals on Wheels”, and Portland Lutheran Parish Senior Group. Fern and Ken were nominated for the ND Andrus Award in Volunteer Work in 2007 and 2008.

Although her husband of 55 years passed away on June 12, 2008, she continued to be active and participated in activities of her grandchildren Eric and Andrew who lived next door in Portland.

On May 22, 2010 Fern and Pastor John Thomas Rotto, of Decorah, Iowa, were married at Bang Lutheran Church, rural Portland. Fern was the younger sister of John's best friend in high school. John passed away on Nov. 29, 2013. John and Fern's time together was short but filled to the brim with happiness, traveling vacations, and visits to family and friends.

In addition to being a wonderful wife, mother, grandmother, and great-grandmother, Fern traveled extensively, was a sewing wizard, and will be remembered as a high-energy individual with a willingness to get involved to help others.

Visitation:  Will be 5–7 PM on Thursday, July 30, 2020 at the Baker Funeral Home Chapel in Mayville, ND and will resume one hour prior to the service at the church.

Burial: Will be in the Bang Cemetery in rural Portland, ND.

To order memorial trees or send flowers to the family in memory of Fern Judith Fugleberg, please visit our flower store.