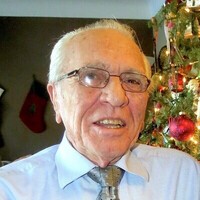 Edmond Larry Hammer passed away at his daughter’s home in Zimmerman, MN on Wednesday Jan. 13, 2021 in the arms of his wife and with his family surrounding him as they rejoiced together in his home going.

Larry was the first child to Edward and Myrtle Hammer. He was born in Minot, ND January 25, 1939. He was baptized and confirmed at Oak Valley Lutheran Church in Velva, ND. He attended Mimor Country Elementary School and graduated from Velva High School. He continued his education at Wahpeton State School of Science with a degree in welding in 1957. He married his sweetheart, MaryAnn (Erickson) Hammer on Oct. 7, 1962.

Larry and MaryAnn raised angus cattle and farmed the family farm in Velva, ND. Throughout the years, Larry worked at the powerplant in Voltaire, ND, mined coal at Truax Coal Mine in Sawyer, ND, and was the Chief Boiler Engineer at the City of Hutchinson Power Plant Hutchinson, MN.  Larry was a jack of all trades. He was a self-taught electrician, plumber & carpenter. When asked if he could make or fix something, his answer was, “somebody else did it.” He loved woodworking and became quite a carpenter in his free time. He was an avid “people watcher” and would enjoy a bag of popcorn while he waited for MaryAnn to finish shopping. Larry also enjoyed fishing, crafting with MaryAnn, square dancing, waltzing, and eating ice cream. He would delight friends and family with stories & jokes and adored his grandchildren and great grandchildren.

In 1970, Larry and MaryAnn divorced. In 1972, Larry had a son, Jay Larry Hammer. Larry gave his life to Jesus in 1982 while at the chemical dependency unit in Minot, ND, which he affectionately named the “Jitter Box.” Because of God’s work in Larry and MaryAnn’s lives, and by God’s grace, they were reunited in 1983. From then on he continued to grow in his relationship with Jesus. He was faithful in prayer each night. During his last prayer he thanked Jesus for changing his life, giving him and MaryAnn a second chance and for being HIS Lord and HIS savior.

He is survived by his wife: MaryAnn; his children: Wendy Kupser (Brad), Chanyce Dahl (Brian) and Jay Hammer (Jolene). He also leaves behind 10 grandchildren and 4 great grandchildren with 2 on the way; his sister: Connie Lindahl and sister-in-law: Pennie Hammer and numerous nieces, nephews and cousins.

He was preceded in death by his parents; siblings: Olga, Norman, Ella, Helga, Gene and Gordon and grandchildren: Rachael, Rebekah and Jacob Kupser.

We, the Larry Hammer family, want to thank you for remembering his life with us. As we think back on all of the wonderful ways in which he influenced our personal lives and the lives of so many others, we give thanks to God for a life well-lived. He was a loving husband, kind and gentle father, patient teacher, and thoughtful man who loved us well and we are grateful.

Praise be to God!

Visitation:  Will be 5–7 PM with a 7 PM Prayer Service on Wednesday, January 20, 2021 at Our Savior Lutheran Church in Page, ND and will resume one hour prior to the service at the church.

Burial: Will be in the Page Cemetery in Page, ND.

To order memorial trees or send flowers to the family in memory of Larry Hammer, please visit our flower store.