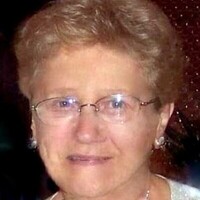 Dorothy (Holkesvig) Heskin (86) passed away September 1, 2021 at Luther Memorial Home in Mayville ND from complications related to dementia. She had been a resident there since October 2017.

Dorothy Kathryn was born January 13, 1935 to Gust and Mabel (Helleloid) Holkesvig at the family farm in Steele County ND along with her siblings Frances, and Howard. The stories of growing up always included life and adventures on the farm alongside all of the Holkesvig Uncles (and Aunt Evelyn) and Cousins. In first grade, she absorbed so much in the country school listening to the older kids lessons, when her family moved to their home in Portland, she skipped 2nd grade and went straight to 3rd. Dorothy was never sure this was a good decision as she was always the smallest in her class, a status that she didn’t much care for. She was proud of her penmanship awards, and did in fact have excellent penmanship. A proud Portland High School graduate, she kept up with many of her classmates living near and far with Pirate Reunions always being the highlight.

In high school, she dated the love of her life James "Happy Farmer" Heskin. After graduating from Portland High School in 1952, and a stint at a Fargo business school, they married when he returned from the Army on September 11, 1954 at Aurdal Church. Daughter Sherry Lynn was born August 20 1955. Son Mark James was born April 13 1960 followed by daughters Sheila Renae Sept 18 1962 and Kathryn JoAnn Dec. 18, 1970.

Dorothy was household manager on our farm and put scrumptious meals on the table at 12 noon and 6 pm each day. It wasn’t until we were out on our own that we realized how spoiled we were on this count. Dorothy was a doting daughter to her mother. She was involved with many duties at Bruflat church, Bruflat Women's Auxiliary, and her beloved Joy Circle with all of her friends. In the summer she was most happy when working on her flower beds, going for bike rides, trips to the cemetery, and with each activity followed by a cone at the Dairy Queen and later Piccadilly. Always. Never a coffee drinker herself, she was always ready to put the pot on with a plate of bars and cookies when friends and family stop by. She provided safe haven for childcare dilemmas for many over the years. Visits with her kids and grandkids were cherished. Simple pleasures for Dorothy include hosting rummage sales with Ruth, giggles with Faith, chatting with Betty, ice fishing with Chad, sending cards and letters with clippings of interest, trying new recipes, calls from Williston, eating out with friends, and anything grandchild related.

Celebrating her 80th birthday with the whole family on a cruise to Alaska was a highlight. In the following years, dementia began to take our cherished Mom away from us.

She is preceded in death by her beloved James who passed away February 1, 2007. She devotedly cared for him for many years as dementia progressed and his dependencies increased. Also preceding her in death is her sister Frances and her Wally, and brother Howard and his Betty. .

A Public Graveside service will be held 11 AM on Saturday, September11, 2021 at the Aurdal Cemetery in Portland, ND.

To order memorial trees or send flowers to the family in memory of Dorothy Heskin, please visit our flower store.