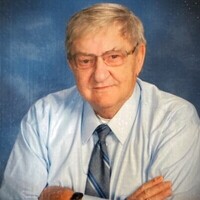 Dennis was born December 30, 1938, near Portland, ND, to Harry and Edna Enger. He was a proud Portland Pirate and graduated from Portland (ND) High School in 1957.

He married his high school sweetheart, Phyllis Ust, October 16, 1957. After being married for a year, they moved to California. In California, Dennis worked for Carnation Creameries and later Bank of America. With Bank of America, he started as a teller and worked his way up to operations officer at the Kaiser Center Branch in Oakland, California. After living in California for 13 years, Dennis and Phyllis returned to North Dakota to raise their family. They lived in a handful of eastern ND communities, but quickly settled in to the Clifford-Galesburg and Mayville-Portland area. Dennis worked various jobs, including at ND State Mill, Portland Junction, and Clifford-Galesburg Elementary, before starting his own tree trimming and removal business, which he operated for over 20 years. He then worked for the Mayville Park District as a grounds keeper. Dennis also spent countless hours creating and maintaining the Goose River Zoo in Mayville (which was located where the current Rainbow Gardens stands).

After retirement, Dennis and Phyllis volunteered for nine years in Medora for the Theodore Roosevelt Medora Foundation, spending two weeks every summer/fall in Medora.

While in high school, Dennis joined the North Dakota National Guard.  When they moved to California, his military duties were transferred to the California Army Reserves. In 1961, his Army Reserve unit was called to active duty during the Cuban/Russian crisis and he spent 15 months on active duty. He then returned to the Reserves for an additional nine years and completed his Army Reserve duties through Fort Lewis, Washington. He was proud of his service and was an associate member of the Vietnam Veterans of America. To support the more-recent service men and women, Dennis made over 800 handmade walking sticks that were distributed to local wounded warriors and to wounded warriors at Walter Reed Military Hospital. He and Phyllis traveled to Washington, D.C., to personally deliver a large quantity of walking sticks to wounded warriors.

Dennis is preceded in death by Phyllis: his wife of 59 years; his parents: Harry and Edna; his brother: Eldred and his sister: Beverly Ostenson.

Private services are being held at the Baker Funeral Home Chapel with burial at the Little Forks Cemetery in rural Hatton, ND. Military Honors by May~Port Honor Guard and the North Dakota Military Funeral Honors.

To protect the health and safety of all, services are currently being limited as required by state and local authorities and the CDC.

To order memorial trees or send flowers to the family in memory of Dennis Enger, please visit our flower store.