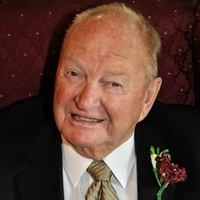 David John Anderson, age 92, passed away peacefully on Tuesday, July 5, 2022, at Luther Memorial Home in Mayville, ND with his family by his side.

David was born to Agnes and Theodore Anderson on September 4, 1929 on a farm in Fremont township, Winneshiek County Iowa. David was the youngest of six children. He grew up with three sisters: Adelaide, Karn and Sylvia and two brothers: Charles and Erlin. He spent his first 8 grades in Iowa County School, graduated from Cresco High School (IA), and received his bachelor’s degree from Concordia College in Moorhead, MN.

While attending Concordia College he met Lois Ann Berg and after a 3-year courtship, they were married on December 23, 1953, at Trinity Lutheran Church in Moorhead, MN in a candlelight service.

David was drafted into the US Army after college and served in Germany. After leaving the Army and returning to the US, David and Lois moved to Esmond, ND where he coached and taught school. They later moved to Starkweather to start farming and David continued to teach, including eight years at the NW School of Agriculture, a High School in Crookston, MN. The AC as it was known, had a 6-month school term from October to March. This was a good compliment for farm families and allowed David to both teach and farm.

They farmed in Starkweather for 28 years, later custom harvesting with their son Tim, having many adventures on the harvest trail from Texas - Oklahoma and up to North Dakota. Retirement found them at Superstition Shadows Park in Apache Junction, AZ. They started as the youngest couple in the park and left as the oldest after 22 years. As snowbirds, they also spent their summers in Mayville, ND with daughter Naomi and Rick Harpestad and family. They gathered the rest of the family each summer for a family reunion on the Harpestad farm.

David was always active in their local church and community. He was President of the Starkweather School Board for 15 years and on the Trinity Bergen Lutheran Church council. He was on the Ramsey County Housing Authority Board for 30 years. His retirement activities included serving on the Our Saviors Lutheran church council in Mesa, AZ for 12 years.

David and Lois loved to entertain and play cards with lots of family, friends and laughter. Bridge was the card game of choice. David and Lois made many lifelong friendships as a result of their bridge clubs. He was a pretty good cribbage player too!

David grew up on a farm that relied on horses for work. It turned out to be a lifelong love of horses that was shared with his children and grandchildren and survives with them to this day. A few ponies for his young children grew into a herd of 36. In his later years, he had a tradition of a ride on his birthday supported by his daughter Naomi.

All of their children competed in local sports and David and Lois were loyal fans and supporters and followed teams even when his kids played in college. Then again with grandkids and great-grandkids. You could always tell David was in the cheering crowd because his voice was one of the loudest.

David and Lois lived in Sun Center Assisted Living in Mayville, ND for 2 years and then moved to the Care Center where they lived together for the past 6 months. They shared life and love together for more than 68 years and treasured their time together and time with family.

The family wishes to express thanks and gratitude to the staff at Luther Memorial Home for all their compassion and care, especially during the last couple of months.

Preceded in death by his parents, brothers & sisters, daughter Karn, and granddaughter Rachel.

Visitation:  Will be 2–4 PM on Sunday, July 10, 2022 with a 3:30 PM Public Prayer Service at the Baker Funeral Home Chapel in Mayville, ND and will resume one hour prior to the service at the church.

Burial: Will be at a later date in the Trinity Bergen Cemetery in Starkweather, ND.

To order memorial trees or send flowers to the family in memory of David John Anderson, please visit our flower store.