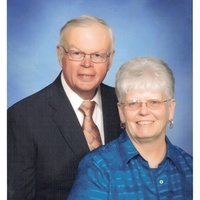 Bert and Shirley Holman were reunited in heaven when Shirley passed away October 13, 2021. Bert passed away on Sunday, October 10.

Bert grew up on a farm outside of Clifford close to many relatives that lived nearby. Even today when talking with those family members, the deep sense of “family” rings true all these years later.

Shirley started on a farm just northwest of where Bert grew up and moved into Portland where she grew up with her mom and siblings. They were a close family, and even today that bond is seen in her nieces and nephews.

Gene and Debbie introduced the two, and they began dating when Shirley was still in high school. The day she graduated; Bert proposed. They were married on December 19, 1964 at Perry Lutheran Church, rural Portland ND. They were the first couple to get married in the new church. Their wedding day was also a North Dakota blizzard day, which prevented many from attending – even the photographer had to stay away, but they were determined to begin their life together that day!

With the excitement of young love, they moved to California in 1966 for work, or so they say.  The pictures we have found show otherwise. There were family members from both Bert and Shirley’s sides living there, and lots of memories made between all of them.  Camping, motorcycling, and we have heard they may have actually worked as well.

After 8 years in California, they decided it was time to come home and start adulting. They moved back to North Dakota, and welcomed two daughters.  Stacy and Marsha were the apples of their eyes. Mom and dad were always committed to supporting “us girls.” Whether it was sports, music, or our careers, they were always telling us to do our best, and did what they could to help us get wherever we wanted to go.

Bert’s work career revolved around farming and truck driving. He worked for many, but regardless of who the boss was, his pride for his job was obvious.

Shirley’s work career involved working for the Clifford-Galesburg School District, and then moved on to higher education, working for Mayville State University until her retirement.

Mom and dad were dedicated members of Norman Lutheran Church in Clifford where they served for many years on different councils and groups, always on the usher list, serving lunches, teaching Sunday School and just keeping an eye on the place.

The Clifford-Galesburg community was very important to mom and dad. They played a part in supporting the Clifford “Norske Park“ update, Clifford Senior Citizens, Kristi’s Kutaway, and the Pit Stop. The weekly pinochle tournament and Steak Night at the Pit Stop were some of their favorite local activities.

Traveling was a favorite pastime for the two of them. An occasional trip to the casino, visiting friends and relatives in Arizona, Minnesota, and of course here in North Dakota, along with the highlight of their marriage - cruises to Alaska and Mexico. They also travelled to New Orleans, Nashville, Branson, Lake Tahoe, Washington DC, San Antonio, and an Amtrack trip to the West Coast. Mom made a trip to New York with her sister-in-law and lifelong friend Joy. It was on mom’s bucket list, and one of the few times we can remember mom and dad not traveling together.

Dad enjoyed fishing, football, and farming. He spent many fishing trips with Harris and Paul Joe. Dad’s experience with fishing is the perfect example of why it’s called fishing and not catching. His beloved Oakland Raiders were one of his favorite teams to watch.  He would often bet a rum and Coke with Laurie Ann when the Raiders and Vikings played. And then the third F – farming. He spent many years sitting in equipment for a number of farmers around the area.  He said it was his favorite part of farming. He got to do the work but didn’t have to worry about the bills.

Bert and Shirley gained two sons when their daughters married. Greg and Chris came late to the party but were welcomed and loved as if they were their own. At Stacy’s wedding, dad gave her away to Greg and said “Good-bye.” Greg has been trying to give her back ever since. Chris was always the card player, and many hands of pinochle were spent with Chris partnering with mom or dad, always trying to beat Marsha.

And then came Brody. Stacy and Marsha may have been the apple of their eye, but Brody trumped everyone. They drove many miles to watch him play baseball, basketball and football, and sing in music concerts. Grandpa Bert was so proud watching Brody on the football field. When we talk about growing up, we often tell Brody that as kids, “Mom Shirley” would say that we had to eat what was made, or we didn’t eat.  Brody does not believe that “Grandma Shirley” would do such a thing.

In May of 2021, we had an 80th birthday party for dad. We cannot express how happy he was to see all those that were able to attend, nor can we share with you how happy we are to know that he got to see many of his beloved family and friends at that time.

Bert and Shirley will join many loved ones in heaven, and it comforts Stacy and Marsha to know they are together, at peace and rejoicing with many family and friends who have passed before them.

Visitation:  Will be 2–4 PM on Sunday, October 24, 2021 with a 4 PM Public Prayer Service at the Baker Funeral Home Chapel in Mayville, ND and will resume one hour prior to the service at the church.

To order memorial trees or send flowers to the family in memory of Bert & Shirley Holman, please visit our flower store.