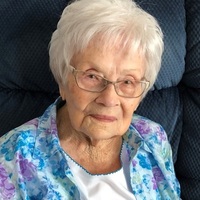 Alice was born December 31, 1920, in rural Hatton, North Dakota, to Erick and Clara Gilbertson.  She graduated from Hatton High School in 1940. On January 23, 1942, she married Earl Aasen. They had one daughter, Faye (Helm).

Church and family were at the heart of everything for Alice. She was a baptized and confirmed member of St John’s Lutheran Church, Hatton, in her youth, and a member of First American Lutheran Church in Mayville until her death. She enjoyed the women’s guild, sewing and church events for many years.

Alice loved to learn, and she appreciated her place in history. She talked about the things she experienced in her life including the stock market crash of 1929, poverty during the Great Depression,  the Labor Standards Act which provided for a 40-hour work week and a minimum wage requirement.  She was proud to be the wife of a Navy radio operator during World War II and she talked about rationing of sugar and shoes, and the news reels at the movie theater. During her lifetime there have been 19 US Presidents, antibiotics and the Polio vaccine were developed, and almost all electronics from TVs to smart phones were invented. She watched man walk on the moon, and the space shuttle program.

Alice was preceded in death by her parents, her husband Earl, her brothers Gilbert and Elmer, and sisters Alma (Champeaud), Malla (“Mollie” Bye), Carolla (“Carla” Gilbertson), and Mildred (Buff).

The funeral will be held at 3 PM on Friday, July 29th at the First American Lutheran Church in Mayville, ND. Burial will be at Mayville Cemetery following the service.

There are no gallery images.

To order memorial trees or send flowers to the family in memory of Alice Aasen, please visit our flower store.